From spring through to autumn in Yorkshire, wasps are normally the most abundant of all fearful insect nuisance pests in homes and commercial premises.

Wasp stings can be extremely painful, and individuals react differently to being stung, from a mere redness and swelling in some, to severe allergic reactions resulting in death caused by anaphylactic shock if not treated in time in others.

Evidence of wasps nests can be wasps continually entering your premises under the eaves, roof tiles or air vents, increased activity in and around trees or a hole in the ground.

Once the Queen has found her nest site she will commence building her golf ball sized nest and produce her workers, which are sterile females. These will then take over the nest building duties and feeding the larvae whilst the Queen is left to produce more eggs until the end of summer, when she will produce her fertile males and females.

Once these wasps have mated and left the nest the males will die and the fertilised females will become Queens and hibernate over winter to begin the process once more. 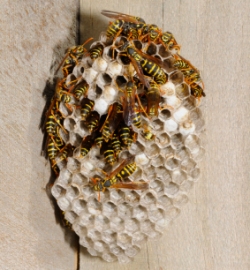 How best to treat an Wasp infestation?

Once it has been established that you have a wasp nest it is advisable due to the obvious risks to call us immediately to treat and where possible, remove the wasp nest.